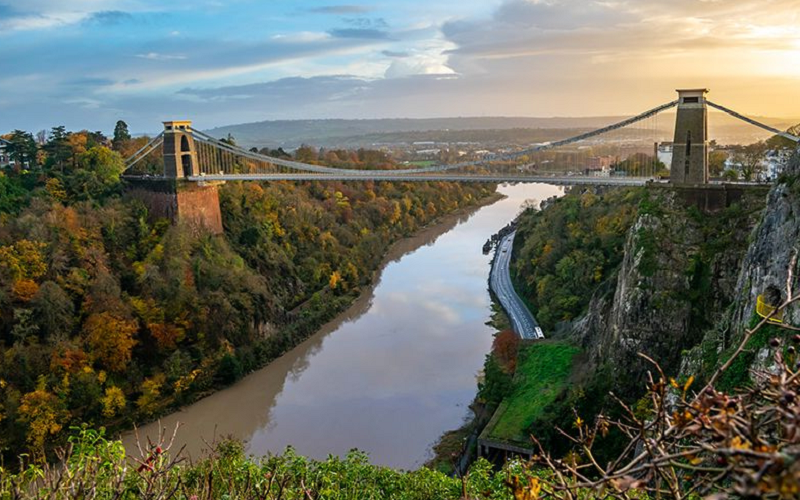 BRISTOL MAY BE THE BEST CHOICE FOR UK TOURISM

Bristol has much to offer the tourist due to its historical wealth and vibrancy. Bristol is the largest city in the south west of England, 106 miles (170 km) west of London, and 45 miles (72 km) east of Cardiff, with a population of approximately half a million. The city lies between Somerset and Gloucestershire and has been politically administered by both counties in part at various times. However, Bristol is historically a county in its own right and is properly entitled the City and County of Bristol.

Bristol is as well known for Brunel’s elegant Clifton Suspension Bridge as it is for Banksy’s street art. And not forgetting Aardman, creators of plasticine superstars Wallace and Gromit. It’s little wonder that innovative museums packed with objets d’art and historic relics have set up shop here. This combination of attractions make Bristol an amazing place for a family day out. Start your intrepid adventure of this southwest city at flamingo lagoons, monkey islands or the depths of the Amazon at the city’s aquariums and zoo, or meander along the River Avon‘s locks and gorges. Shopaholics can head to the Bristol Shopping Quarter, a collective of galleries, malls and independent shops. Little chance of buying The Wrong Trousers here.

The city grew up around the original junction of the River Frome with the River Avon, adjacent to the original Bristol Bridge in the eleventh century. Despite its inland harbour location, in the 17th and 18th centuries, was one of the world’s greatest ports. Newfoundland was discovered by John Cabot in 1497 and the merchants of Bristol exploited the New World with fortunes being made from sugar, tobacco, slaves and rum.

Bristol International Airport is located (postal code – BS48 3DY) 8 miles south of Bristol City Centre at Lulsgate Bottom in North Somerset and is the commercial airport serving the City of Bristol, England. In 2009, the airport drew 45% of its passengers from the former county of Avon area, 13% from Devon, 10% from Somerset and 10% from Wales. In 2012 it was the ninth busiest airport in the United Kingdom, handling circa 6.5 million passengers, a 5.9% increase since 2011 making Bristol the fastest growing of the ten largest UK airports in 2012.

With Bristol and Bath close by and the beauty of the Cotswolds within easy reach, Bristol Airport provides a fantastic hub from which to explore south-west England. Serving routes to European hubs for business and leisure travellers with airlines including easyJet, Ryanair and KLM, the award-winning airport is renowned for its top quality customer service and fantastic regional connections.

Regular buses run from the airport to both Bristol city centre and to Bristol Temple Meads railway station, where you can get connecting rail services onto Bath and other destinations. The station is just 8 miles from the airport and is a 15-minute walk from the city centre. Hire a bicycle to explore the city’s many cycle ways, or rely on the extensive public transport network to get around.

If you prefer to travel in comfort, consider hiring a chauffeur service for your Bristol airport transfer. Chauffeur services have a long tradition in England, and they are still a very popular means of getting around — especially for rides to and from airports. For little more than the cost of a traditional, “plain” taxi, you’ll have a professional, personable driver supplying you with a meet and greet service at the airport, and a comfortable, classy ride to your hotel.

What to See and Do In Bristol

The Zoo is bursting with life, including a host of adorable new babies this summer. Look out for our Goodfellow’s Tree Kangaroo joey, Kiri, who likes to pop his head out of mum’s pouch and is becoming increasingly adventurous. Watch young spider monkey Elli swing about and pay a visit to our recently-hatched keas.

Start your Bristol experience with a trip to Bristol Harbour. The harbour has stood since the 13th century due to its excellent location upon the River Avon. In the past, this was the departure point for ships sailing to the ‘New World’ and a popular arrival destination for Europeans. Today, the main port has been moved further downstream but the harbour remains full of activity, with a number of arts and exhibitions spaces on-site, as well as cafes and interesting attractions.

Take a river cruise on a ferry to learn more about Bristol, the River Avon, and nearby towns. Or time your trip to coincide with the Bristol Harbour Festival to see a grand array of boats on display, including Royal Navy vessels and tall ships.

Step on board the most extraordinary time-machine. Brunel’s SS Great Britain, the world’s first great ocean liner, Bristol’s no.1 attraction and one of the UK’s top ten museums. The brainchild of the most famous honorary Bristolian, Isambard Kingdom Brunel; this iconic steam ship is the heart of a multi-award winning visitor attraction.

Rescued from rust and wreckage in 1970, and since lovingly restored to her Victorian hey-day, a visit to the SS Great Britain allows you to step back in time and explore true stories from the opulent First-Class to the cramped and quarrelsome Steerage. Each kitchen and cabin, dining room and doctor’s surgery emanates authentic sounds and smells which bring the ship and its history to life. So much more than a dusty old museum, this is a living and breathing, atmospheric experience.

Step ‘underwater’ for a unique and magnificent view of the ship below the beautiful glass sea; investigate the Riggers’ Yard and the Great Western Dockyard, test your skills with interactive displays and choose from a selection of fascinating audio companions. With storytelling and games for children to in-depth historical research in Brunel’s Institute, there is something for everybody at Brunel’s SS Great Britain.

Discover over 400 species of exotic and endangered animals from across the globe at Bristol Zoo Gardens, all set within award-winning gardens spanning over 12 acres. Journey into an amazing animal kingdom and meet famous faces as well as some unusual creatures you never knew existed.

Marvel at 32-stone gorilla Jock strolls overhead, and say hello to the majestic lions Sahee and Sonika. Watch the African penguins zoom through the water at Seal and Penguin Coast, and see the cheeky meerkats and lemurs scamper around.

The Zoo is bursting with life, including a host of adorable new babies this summer. Look out for the Goodfellow’s Tree Kangaroo joey, Kiri, who likes to pop his head out of mum’s pouch and is becoming increasingly adventurous. Watch young spider monkey Elli swing about and pay a visit the recently-hatched keas.

The Bristol Channel is a major sea inlet in the island of Great Britain, separating South Wales from Devon and Somerset in South West England, and extending from the lower estuary of the River Severn to that part of the North Atlantic Ocean known as the Celtic Sea. It takes its name from the city of Bristol and is over 30 miles (50 km) across at its widest point.

The Bristol Channel, on both the South Wales and West Country sides, has more miles of Heritage Coast seaboard than any other stretch of water in the United Kingdom.